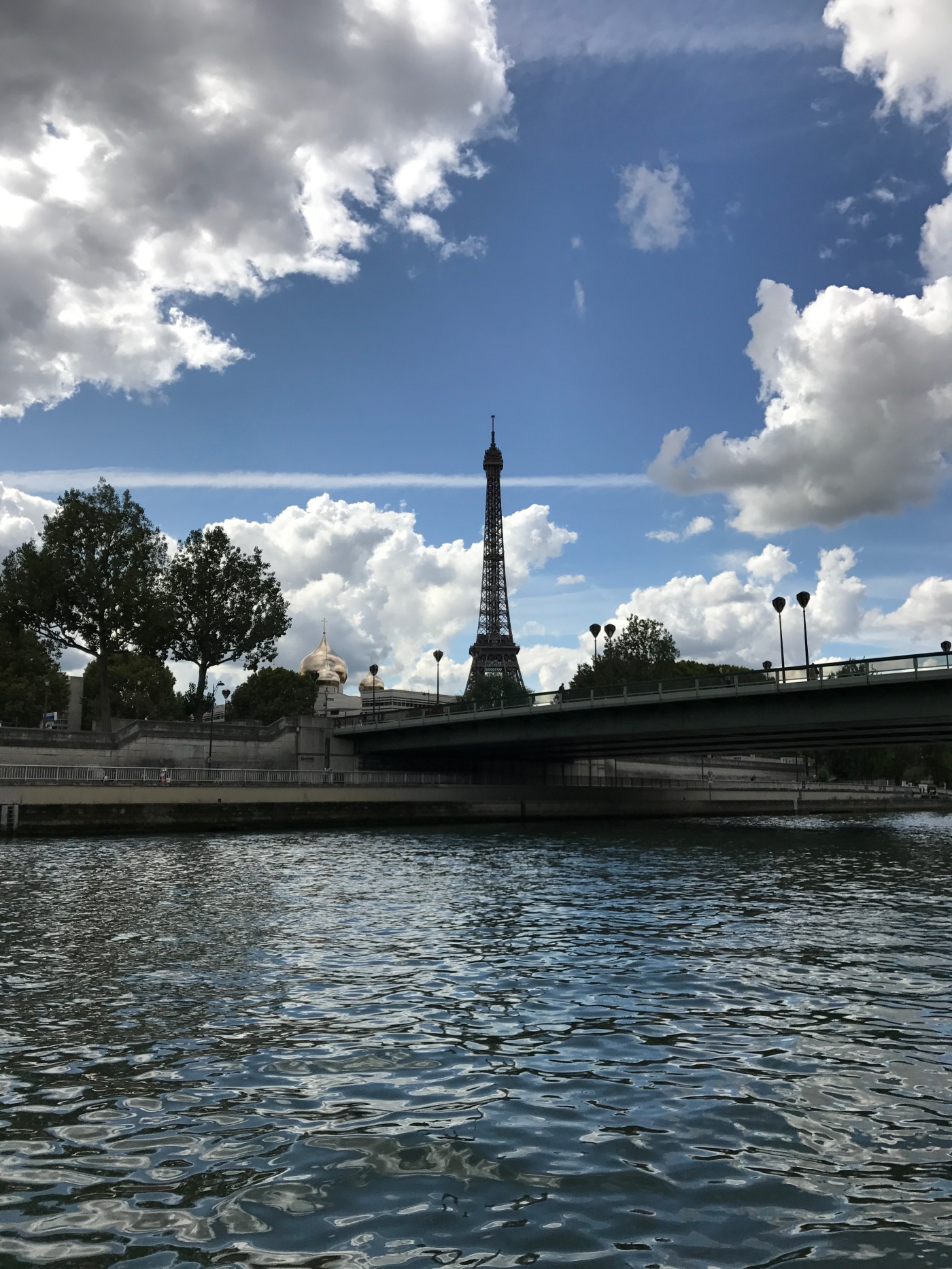 Going abroad was never a frightening idea for me. In fact, it was my dream. My parents were both rather adventurous and raised me to be the same. But for many reasons we were unable to move back to the United States, so to make my high school life something to remember, I decided to become an exchange student.

Ever since my trip to Paris in 2013 I’ve been dying to go back to the beautiful country again. The summer of 2016, my mom and I stayed in Montpellier for two weeks, where we experienced a more slow-paced French life. And that was when the idea of a long-stay came into my mind. Months later, I had passed the interview at an exchange agency (Bright Future Educational Exchange 遠景安), and was deemed suitable to apply for a French exchange program.

Then began my seemingly endless waiting for a placement. Through March and April I didn’t think too much about it. When it was May I began to check my emails everyday, hoping that some family in France had chosen me. Until June, there still wasn’t any news and I was pretty nervous. By then everyone in my class knew that I was going abroad for a year. They’d even recorded a farewell video and made me a big card, how embarrassing would it be if in the end I was unable to exchange?

Finally, on the 26th of July I was contacted by the exchange office. My mom had accidentally left her cellphone at home, and while chilling on the sofa with a soothing mask stuck on my face, the unmistakable iPhone ringtone sounded and I proceeded to ignore it as phone calls for my mom often had nothing to do with me. But then the name “Bright Future Educational Exchange” on the screen caught my eye, and without hesitation I picked up. The lady at the office told me that I had a placement, and that some brief information had been sent to my email already. I was surprised and excited and trying my best to keep the mask intact with my face (which meant I had to keep a straight face when I was supposed to smile very big and dance around the room), at the same time reading the email over and over again, almost not being able to believe that somewhere in Eastern France, a family had their door open for me. All I knew was that I had four host sisters and two host brothers, but I had no idea what their last name was or what my host parents were called. That did not stop me from trying to search for my future family on social media though, but with no luck. However, I did go through all the pages on my future school’s website. Institution Sainte Chrétienne Sarreguemines was a private Catholic school in the heart of town, where I will be attending with my host sister who is one year older than me, Cassandre.

After a week or so I received the official placement form from PIE, the exchange office in France. I was to live with the Dupont family in a quiet neighborhood near the French-German border, in the town of Petite-Rosselle. Google Map became the website page that I almost never shut down because I spent most of my time “strolling through the streets” and having a look around the area. The family had a piano, guitars, and also spoke English and German. As I scanned down the form something caught my attention – “Any pets?”

I laughed. Later on, I learned through a video call with my host parents that the chickens provide fresh eggs every day for the family.

I sent them an email after I returned home from the seminar at Bright Future Exchange, and moments later my host father Gilles added me on Facebook and we were already chatting through Messenger. He proposed the idea of a video call and not long after I was talking to my host parents “face to face”. Gilles was very enthusiastic and liked to talk, he gave me a brief tour of the house and explained some things. My host mother Isabelle, on the other hand, was more of a quiet and calm character. She took over the video call when someone called Gilles on the phone, and told me that the school was closed for the summer so they weren’t able to enroll me yet. I was worried when I heard this, but Isabelle assured me that everything was going to be fine.

Unfortunately, I did not get a chance to talk to Cassandre or any other siblings through the video call, for they were not at home at the moment. However, after a few days Cassandre reached out to me through Facebook and we started messaging as well.

I applied for a French student VISA at “La France à Taïwan” and a week later the document came through. With the approach of my departure date (August 24th) I began packing. Because of the region where my homestay family was, temperatures are to drop pretty early into autumn. Hence the reason I did not bring much summer clothing. I also had medications, cosmetics, and gifts for my homestay family stashed in the “seemingly too small but in the end was big enough” suitcase. Apart from that big check-in luggage there was also a small black suitcase that I was to take with me as a carry-on along with my backpack. In the small suitcase I put in all the things needed for the first week in France – for exchange students from all over the world were to gather with the PIE organization in Paris and take part in a language camp. This is a great chance to get to know many people of different nationalities. In the mornings, we will have French and expression classes, and in the afternoon (when we would be feeling sleepy because back in Taiwan it would be bedtime) we go out on excursions to have a good look at the city of Paris. I was happy with the schedule and pretty sure it will help with the jet lag.

Throughout my last month in Taiwan I continued to exchange emails with my host parents and message with Cassandre almost every day. I told Gilles and Isabelle that I wished to be evaluated like a normal student, because most schools don’t evaluate exchange students so that they don’t need to turn in homework or take exams, which takes off a lot of pressure. I also wanted to choose German or Spanish class instead of English, for English is already my native language. My host parents thought I was “courageux” (courageous) for willing to take up so much challenge. But isn’t that what an exchange student should do? With ten months’ time, one should make the most out of it.

The lady from the exchange office booked my flight for me, and I was scheduled to fly to Hong Kong for transit, and then to Paris, along with seven other Taiwanese exchange students. A few days prior to departure I received an email from Cathay Pacific, the airline responsible for the flight from Taiwan to Hong Kong. It stated that due to Hurricane Hato there might be delays or cancellations of flights. I got nervous, because if we couldn’t get to Hong Kong on time then we would miss the flight to Paris. I showed the email (which was in English) to my friends, and some of them misunderstood the message and thought I had to leave a day early. I let one of my good friends believe so, because I planned to surprise her at school on her birthday, which was August 23, the day before my (real) departure date. In the end, I bought a beautiful chocolate cake and sneaked into my school, where all my friends were at for summer school. I also got her the latest album of her favorite singer, which she’d wanted for a while. Hopefully that was the best birthday she’d had so far.

On the night of August 23rd my parents took me out for dinner at a nice French restaurant – Un Petit Pas Bistro (ㄧ小步）We enjoyed a delicious meal together before my departure. The most interesting dish of the night was the dessert, which was a bubble milk tea flavored soufflé. That night, I also received two wonderful gifts from my parents – a custom laptop slipcase completely handmade by my mom, and a beautiful piece of Hetian jade from my dad. In Chinese culture, wearing jade is said to keep one safe and healthy.

Finally it was August 24th. I woke up quite late in the morning, turning breakfast into brunch and only drinking a homemade berry smoothie later in the afternoon. Because of the wrong timing I got super hungry when I had finished the baggage drop off procedure, but I decided to wait until I got on the plane and then snack on whatever they provided. The eight exchange students met for the first time at the airport and we quickly made friends (I already knew Jolin from the seminar). On the way, we chatted a lot and talked about or respective host families. Everything went smoothly and we boarded the plane in no time, but not before saying the last goodbyes to family and friends through airport wifi. I also let my host family know that I was on my way to France.

An hour later we landed in Hong Kong. Some girls had to go to the transit desk to get their boarding pass for the next flight, so the rest of us went with them and then we went through another security check for transferring passengers. After that, it was all about walking past mixed-perfume scented Duty Free shops and heading towards gate 32 to wait for our flight to Paris with Air France.

One thought on “Project France”