Paris was much less crowded than usual today.

Papa dropped me off near the Île de la Cité and I went to reserve a time slot to climb the towers of the Notre Dame Cathedral. I still had a little bit more than an hour before my reservation, so I randomly picked a café from many on the same street and ordered a salad with a coffee.

The first time I climbed the Notre Dame towers was back in seventh grade when I visited Paris with my parents over the winter vacation. I still remember how cold and windy it was, and the condition was even worse at the top. I wanted to experience it again without the harsh weather. Though it rained this morning and the sky was nowhere near sunny and clear, a temperature of 15 degrees Celsius was enough for me to keep myself from shivering to death.

We climbed the first flight of stairs that twisted and seemed to go on forever, to arrive at the boutique shop, which is also where we buy the tickets. I showed a photocopy of my passport to prove that I was younger than 18, and got a free pass.

The stone steps were very uneven, a result from years of touristing, probably stepped over more than a trillion times. A girl behind me constantly grumbled about the long climb and her boyfriend kept telling her that we were almost there.

Finally, I saw light pour through the dimly-lit and narrow stairway and knew that the balcony was just around the corner. I was instantly engulfed in the cool air as I stepped outside. Only now as I studied the gargoyles did I notice how lively they seemed — they were all different one from another, carved with expertise and given vivacious expressions and postures. I couldn’t help but think of Quasimodo and his friends at the top of the Cathedral, perhaps the gargoyles secretly came to life during the night and might’ve even stolen a few prey from each other? 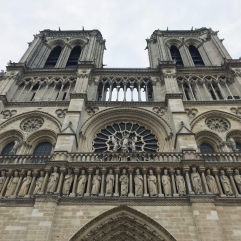 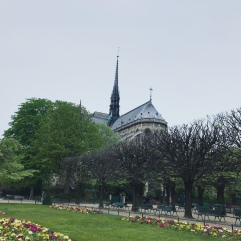 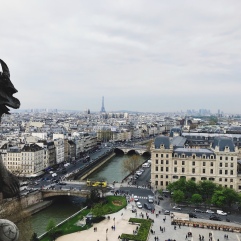 How much history has this gargoyle overseen? 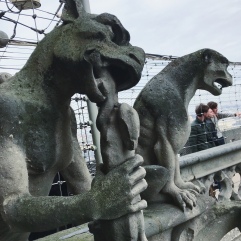 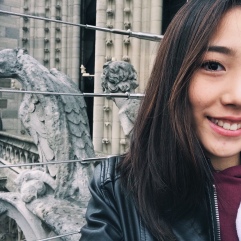 He didn’t wanna look at the camera.. oh well 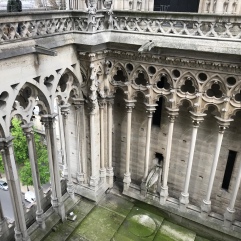 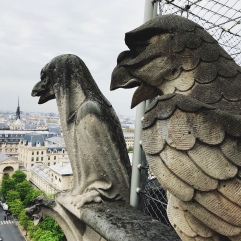 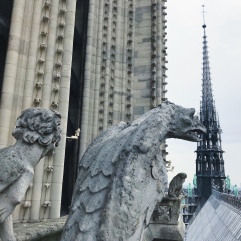 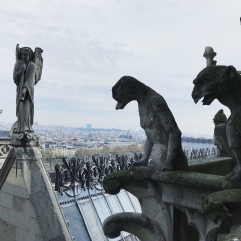 It was a relatively quick visit, and I soon found myself at ground level wondering where I should go next. I opened Google Map and decided after a while that I’d bike to the Louvre. Paris has a bike sharing system called the Vélib and all it took was to register an account, choose a subscription type (1 day, 7 days, monthly pass… etc) and pay the fee along with a €300 deposit fee that would be deducted from your bank account if you didn’t return the bike at the end of your 24 hours. The first 30 minutes of each bike rental is free, so the trick is to keep the voyages short so that you don’t exceed the pay-free time limit. 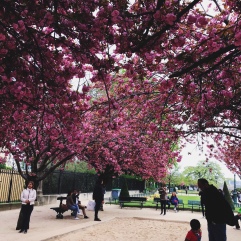 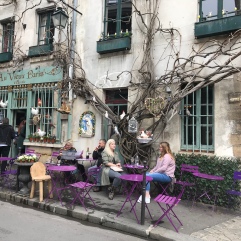 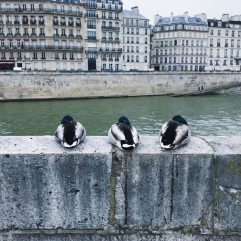 After checking the tire and brake conditions, I unlocked a bike and was on my way. I passed by a shopping area and circled around a block to find the nearest bike station from the Louvre. The bike clicked into place and I walked for about five minutes to the plaza where the glass pyramids sit. But I didn’t enter the museum even though it would’ve been free. I opted to find a spot, listen to some music and do a little “people watching”.

Asian tour groups, as usual. Skaters, cyclists, penny boarders, friends having a leisured afternoon coffee… A woman around her 20s sat down at the other end of my bench and rolled herself a cigarette. Light whiffs of smoke drifted my way.

Paris seemed even more beautiful and timeless with the mild scent of cigarettes. 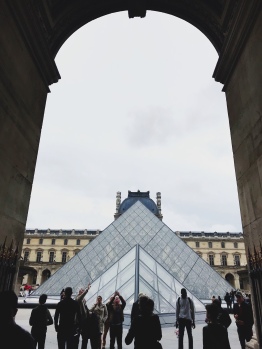 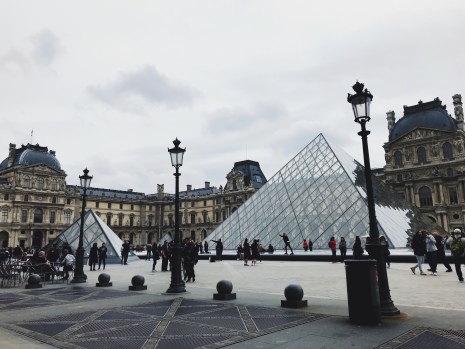 The idea of visiting the boutique of a friend’s family friend slowly came to my mind, and it was only a five minute walk from the Louvre. I passed by another small plaza where a band was performing classical music, only to come face to face with a construction barrier. I had to walk around the building to find the boutique.

“Sophie HONG” was written across the display window, and through the reflections I saw a tall figure inside the boutique, bent over the desk seeming to be working on something. As I pulled opened the door he looked up and I instantly recognized him from one of the photos on my friend’s Instagram. 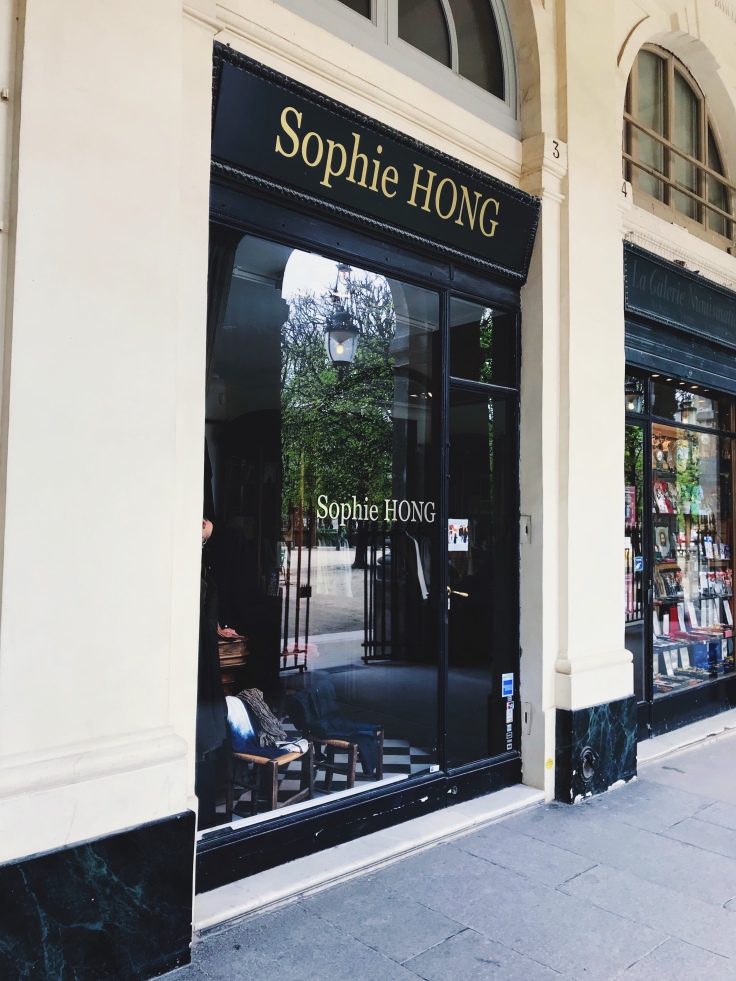 We ended up talking for an hour. He showed me the collections and the fabrics used were a complete wonder. Each piece was delicately hand-made and was a mixture of eastern and western style, of tradition and modernity. I got to try on a few and the attires screamed personality.

My next stop was, once again, uncertain. I had the idea to bike all the way to the 14th  district and visit the Catacombs, but I was supposed to meet up with my host parents in an hour. There wasn’t enough time. So I changed the GPS destination to the Eiffel Tower and cycled along the river Seine. Then the Place de la Concorde came into view and I realized how I haven’t really been there before. So I abandoned the iron lattice tower and crossed the bridge to the roundabout with the Luxor Obelisk set in the center.

There was a huge marriage in front of the Jardin de Tuileries, so the road was almost blocked by limousines and extravagantly dressed guests. I had eight minutes left to get to the nearest bike station and it required me to circulate along the roundabout. The traffic was pretty scary and I debated on following the buses or taking the sidewalk and weaving through the wedding guests.

Just then a man also on a Vélib bike stopped beside me and asked if I was lost. I explained that I just needed help to find the bike station. He cordially proposed to show me the way. While waiting for multiple red lights, we chatted a little and he was very surprised to learn that I was only seventeen years old.

“It’s really brave of you to explore a foreign city by bike on your own,” he said to me before taking off after I returned my bike to a slot at the station.

“I like these kinds of challenges,” I replied before walking to Champs-Elysées.

I wanted to find an ice cream stand but there were too much people waiting and I already got a message from my host parents saying that their meeting was over. So I took my only metro ride of the day to find my host parents. We got Subway sandwiches for dinner and visited the house of Marion, my eldest host sister, and her fiancé Mayeul which was almost an hour away from Paris.

I think I’ve grown to love traveling alone. I used to hate being on my own, I always felt better having friends around. Don’t get me wrong, I still enjoy going out with friends, but exploring alone has many of its own benefits. Single travelers are free spirits who come and go when and how they want, without needing to consider the opinions of others. They can change their plans within seconds and it doesn’t bother anyone. Besides, I find that I obtain much more time to think, because there’s no one I need to hold a conversation with.

2 thoughts on “My Paris Day Trip”