Today, December 6th, is St. Nicolas Day. However, we celebrated this festival in advance on December 2nd.

We set out for Metz at around 11 in the morning, bundled up in layers of clothing to guard ourselves from the cold of December. I’d previously been to Metz before, but it was for a birthday party of a friend of my host parents, so I didn’t get to see the city.

Forty minutes later we parked the car under a mall and found our way up to ground floor. The cathedral was just a five minute walk away from the mall. We weaved through the crowds in the not-so-wide streets, and finally arrived at the large plaza. Apart from the intricate architecture on the other side of the area, there was also a Ferris wheel slowly rotating, with a Christmas market at its feet swarming with people. Even from a distance I could see the smoke and vapor curling up from the little cabins selling hot drinks and snacks. It was only the beginning of December, but here in Europe Christmas seemed more like a monthly event. The atmosphere was jolly enough. 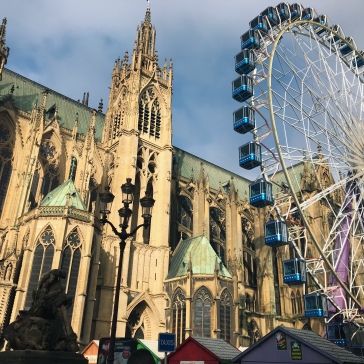 But that was only the first half of our day trip! After a pleasant lunch (which I ordered beef carpaccio with mozzarella) we headed towards the next destination – Nancy.

It was the night of the celebration of St. Nicolas. There was going to be a parade, and some roads were already restricted from cars when we got there. Police were everywhere supervising the traffic and checking our bags. As we walked towards Place Stanislas, we passed by a huge open space surrounded by fences, and inside were parked the decorated chariots for the parade.

The lengthy promenade was used as the venue of a carnival. Tents linked together and displayed all sorts of gadgets and products. I noticed a lot of antiquities, or maybe they were designed to look like they were from a few decades before. I didn’t take photos of the stands because usually venders were against the idea. Between lines of stands were games for children, which normally required patience to complete the task. What caught my attention was a merry-go-round. Ask anyone what a merry-go-round looks like, and they would most likely describe the brightly-lit round castle-like structure filled with beautifully painted horses that looked almost real when they “gallop” as the merry-go-round rotates. Little girls loved pretending to be princesses riding their groomed pets, and little boys acted like they were brave soldiers or Prince Charming. But this particular merry-go-round at the carnival was different. It possessed a vintage style and there were no horses to be seen. Instead, it had an old-fashioned airplane, an armor pieced into a shape of a gorilla, a wooden giraffe with knobby legs, and many other interesting objects. It looked so much more fun than a horse, because everyone was a completely different character depending on which seat they sat in. Too bad I am a seventeen year old girl who measures at least 170cm, or I would’ve loved to take a ride.

Maman and me in front of the carnival!

Another stand that caught my attention was a french fries maker. But it was not at all like the process we see at McDonald’s. It was a complete DIY procedure led by one of the stand owners, from the first step of choosing your own potato. The second step was to put your potato on a machine where you turn a handle repeatedly and the bent blade scrapes away the skin. Next you cut your naked potato into slices, and finally you arrive at the last station – the frying stand. There were two stoves with boiling oil, and as you wait for your fries to ready itself, another stand owner plays some funky music to dance along to. That way, you are not at all bored when waiting for your food. The stand owner even had one of those ancient-looking microphones that resembled a little trumpet, to which he spoke into and encouraged everyone to show some moves. We did not make our own fries, but we were equally content as well just watching other people go through the fun process.

At the end of the promenade was also a Ferris wheel, this time a white one with half-open carriages. There was also a Christmas market, but a little bit bigger than the one in Metz. We still had plenty of time before the parade began so we found a restaurant and sat down to heat up a bit and also have a drink.

Did I mention that December 2nd was my 100th day in France? Because of that, I was allowed to try a little sip of hot wine from Papa’s glass. I only had that one sip to savor the taste of the drink, and it was wonderful. Vin chaud, the French name for hot wine, is red wine brewed with spices and fruit, usually lemon. Sugar is also added. The sip left a lingering scent of cinnamon on my tongue.

Pauline and David (her boyfriend) joined us at the restaurant, and Pauline proceeded to tell the story of St. Nicolas:

There once was a family living in the forest, and they did not have enough to eat, so the three children went out together to search for food. Unfortunately, they got lost in the woods. But soon they spotted a house in the distance and immediately headed towards it, not knowing that it was a butcher’s house. The butcher welcomed them and fed them, and not long after the three children fell asleep. Taking the chance, the butcher cut the children into pieces and put them in the salt tub for preservation.

Time passed and one day a man appeared at the doors of the butcher’s house. This man was Saint Nicolas. The butcher prepared a meal for him, and Saint Nicolas asked specifically for the meat in the salt tub. When the butcher lifted the lid of the tub, the three children woke up from a deep sleep, no doubt alive, as though they had never been cut up. It was a miracle. From then on, the butcher followed Saint Nicolas everywhere to punish children who did not behave.

And voilà the story behind the celebration being held in the city. 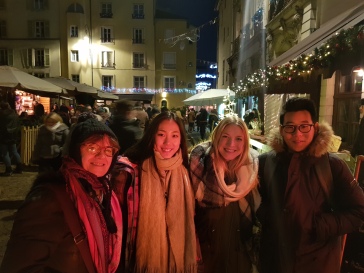 With Maman, Pauline and David

Rumor has it that St. Nicolas would be seated on the last chariot, while the butcher comes in second last, right before his patron. The parade was scheduled to begin at 7 pm but the track was pretty long and they had to stop at certain points to do a little performance. Papa, Maman and I tried to squeeze through the crowd to get to the other side of the Place Stanislas, but it was impossible. We turned back and found a place just outside the restaurant we previously had a drink at. There was a plastic road / sidewalk dividing pole with a street sign in front of it, which I guarded for later when the parade arrived at our section to climb onto. I had a better view than anyone else.

A big Christmas tree at the Place Stanislas 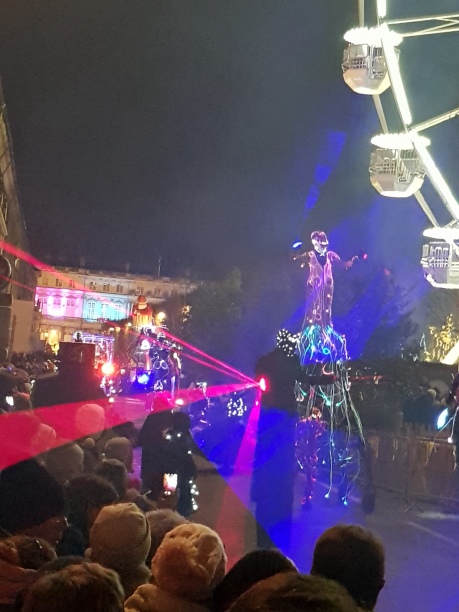 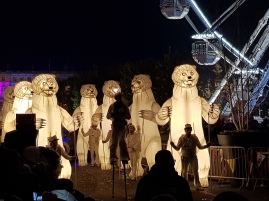 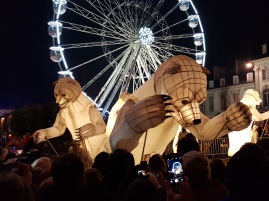 Not every act was necessarily related to St. Nicolas, but all in all light work played a huge part in the parade. Every performance was a mix of bursting colors and music. I haven’t seen a parade in a very long time (I can’t remember when was the last time…) and it was pretty nice to get a dose of visual effects like this. However, we did not decide to stay in the same location after thirty minutes or so because it was VERY cold and we still haven’t had dinner. So we walked down the trail in the opposite direction of the parade, this way we could find something to eat faster and see all the chariots too (talk about efficiency!). Some chariots corresponding to the festival include one with a cage and three kids locked up inside, the butcher waving his blood-stained knife, and of course St. Nicolas sitting in a plush chair like royalty at the end of the lineup. 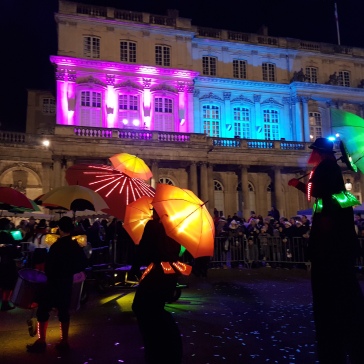 Three children in the cage 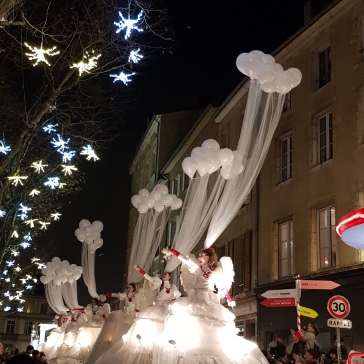 Fortunately we were able to find a restaurant that had available places. By 9 pm we had filled our tummies with a great dinner and prepared to walk back to the parking lot.

Unfortunately, the parking lot was already closed and we found ourselves blocked on the other side of the metal gate to the entrance. For a moment I couldn’t believe that we couldn’t gain access to the car. I even thought maybe we would have to crash at Pauline’s apartment. But clever Papa thought about looking around the building, and we found the alternative entrance for those who need to get to their cars after operating hours. Papa entered the code on our parking ticket and the buzz clicked to open the door for us. Our ticket was also able to automatically open the exit gate and we were on our way home.