Like most European countries, France is a land of football craziness. Supporters stan their favorite football players, football clubs, and the national team. And for any sports fan it is of course one of their goals to watch a game in the stadiums.

I was able to experience the football heat last night at the Stade de France, the official stadium for the French national team. It was one of the last “friendly” matches before the approaching FIFA World Cup 2018, and the game was between France and Ireland. Because of that, the players didn’t put out all the energy because they needed to be very careful not to get hurt right before the big games. However, the crowd was as enthusiastic as ever to see the players on the field. Fans flooded the stadium sporting French flags and football jerseys. While it seemed like all the players were equally supported, the star player Antoine Griezmann’s name could be seen and heard everywhere.

The weather was not nice at all, with a storm previewed, but that did not stop the football passion. We were drenched while going through security check and the wind made it so much worse than it already was. It was recommended to arrive about two hours before the match begins to insure that we get inside the stadium in time because of the immense amount people that flock here each time there’s a game. We finally settled down in our seats in a corner section of the stadium, which we’d chosen so that at some moment we’d be able to watch a Griezmann attempt of shooting a goal from a great angle. The rain was pouring down through the open-sky ceiling of the stadium and under the light strobes the pattering storm almost seemed like a snowfall. But nothing keeps the game from going – the crowd cheered as the team emerged from the tunnel to warm up on the fields.

Even before the game began the crowd was already throwing out chants. “Allez, les bleus, les supporters sont là!” (“Go, the blues, the supporters are here”. Blue is the official color of the French national team so they are often referred to as “les bleus”. The most popular hashtag of the team is also #fieresdetrebleus, which means “proud to be blue”). The host called out to all the people in the stadium to follow along as they raised their hands in the air and shouted “France!” each time they clapped. Colored paper was also taped to each seat prior to our entrance, either blue, red, or white. As we held up the papers in the air when the host called our section, the big picture spelled out “BLEU” and was placed right across from the tunnel, where the players can see as they come out onto the field. French people do not hesitate to show the players their love!

The most expensive seats, those nearest to the field, were the ones in the rain. Though the storm did cease during the match, the field was already slippery and it was evident that many of the players were struggling to keep themselves on their feet. There were multiple times when they slipped and fell on their bottoms without being pushed by anyone. Even so, the crowd cheered them on and they got back up immediately. There was one section where the fans were really passionate – throughout the entire game they did not stop a second from whooping, hollering all kinds of chants and jumping up and down. It was what we always heard when we watched football games on the TV, the background cheers of the crowd. I always thought that it was everyone, but in fact it was only a small group of very intense football fanatics that kept the heat going. At some point a wave was started and I watched as it continued around the stadium more than five times. As we saw that the wave approached us, we held out our arms and started to make drumroll sounds, and then everyone stood up and threw their arms in the air and then sat back down as the wave was passed on to the section beside us.

The first goal was shot past the Irish goalkeeper by Olivier Giroud, number 9 of the French team, 40 minutes into the game. The crowd went berserk and we jumped onto our feet to celebrate the first goal of the night. Four minutes after, number 8 Nabil Fekir shot in another goal and basically stabilized the French’s win.

My favorite player, Antoine Griezmann, didn’t make too much of an appearance. He only came in when there was about 30 minutes left of the game through a change of players, and by then the weather condition was so bad that the field was beginning to get flooded. However, I was still very excited to see him in the game even if it wasn’t for a long time. He had to be protected for the World Cup, and we all understood that. One of the cutest things was when he had the ball under his control and was racing to score a goal when all of a sudden he slipped and glided three meters in the pool of water that had gathered on the field. The focus camera showed his disappointed expression, but everyone thought it was adorable.

The match ended with France winning by two goals and zero goals for Ireland. We all took it as a light-hearted competition, and since it was a friendly match, both sides of supporters should be friends too. As we weaved through the people outside the stadium, I saw many French football fans bonding with the Irish fans, getting beer and joking around together. In the end, it’s a sport, and as players demonstrate wonderful sportsmanship, so should we. There’s no real rival in the world of sports games. We’re all united with our love for the same sport.

Being able to see a football game in Europe was one of the best things ever of my exchange year. Even at home, I would sometimes join my host father in front of the TV and cover my ears while laughing super hard each time he yells at the top of his lungs when the team he supports scores a goal. At the stadium, I saw parents who came with their children, many of them wearing mini jerseys or caps. Some were so young that they were smaller than the seats and had to stand up all the time to see the field. Though I did cheer for the players, the kid behind me screamed much louder than I did. Football really is THE sport of the nation, and many French children are influenced with the football frenzy throughout their upbringing. I’m sure that’s one of the main reasons why France has such supportive football fans that stand with the team no matter when, no matter where.

The FIFA World Cup is right around the corner, and I just can’t wait! 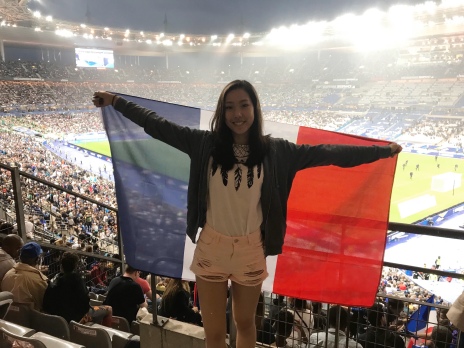 our view in the stadium “Stade de France”

here with my host father, host sister and her husband!

One thought on “France Through My Eyes: Football Frenzy”